Editing the Rough Cut of the Movie: King’s Faith 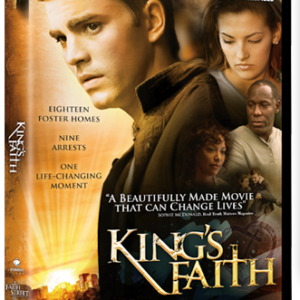 The following article was published on adhub.com:

“We will just keep experimenting and see if we can find this score together.” – Nick Dibella

It is safe to say that God was at the lead of this editing team. It was an uplifting experience to share their passion and commitment to excellence in editing and scoring this film.

JM: Now that you are done shooting “King’s Faith”, what is the next step in this process?

Nick Dibella: We are currently finishing the rough cut. A rough cut is just as it sounds … rough. We cut all the scenes together, assemble them and then add what’s called a temp score. Anthony Deluca and I have been double teaming. We both work on editing the scenes, and then Anthony converts them to HD (high definition).

JM: What role does music and sound design play in the editing process?

Nick DiBella: This is a unique situation because most composers would never do this, but, I love cutting with music. In fact, I have a hard time cutting a movie to nothing. Now I could go around chasing scores from some big motion picture, but at the end of the day this is such a unique movie, and I was listening to a ton of scores and never really found one that was in the pocket the way I like it.

I talked to Steve Bartolotta and asked him to rough out some pieces, each being about a minute to a minute and a half long. I asked him, Can you just throw me a bunch of themes, some of them might suck and some might be great, and we will just keep experimenting and see if we can find this score together.

Steve has been great working at night and just banging out these little pieces of music and them uploading them to me. Anthony and I try them out and we have actually been finding the score to this movie. Now this isn’t the way it is usually done but so far it has been very effective for us.

Steve Bartolotta: At our first meeting we established what this movie will actually sound like… musically. Once I find my sweet spot, I move a little to the right or left of center just to throw Nick a little something new. Every time I send him a batch of fresh baked music, I’ll add a little new wrinkle. It has worked for us so far and we have been very lucky. Typically, you don’t score a film blind, Bartolotta says laughingly.

Nick DiBella: It is almost as if you have been guided by “spirit”. What do you think Anthony?

Anthony Deluca: I think so. It has worked really well. We planned to have the rough cut done by October and here we are at the end of October with just a few scenes to go.

Nick DiBella: I can’t stress enough the importance for me in having music to work with. I can’t move forward with a theme without it.

Steve Bartolotta: I don’t think the music should overtly make or break the theme. I don’t like music that you notice in a film, I don’t believe that is the point. It should be there to support the scene. 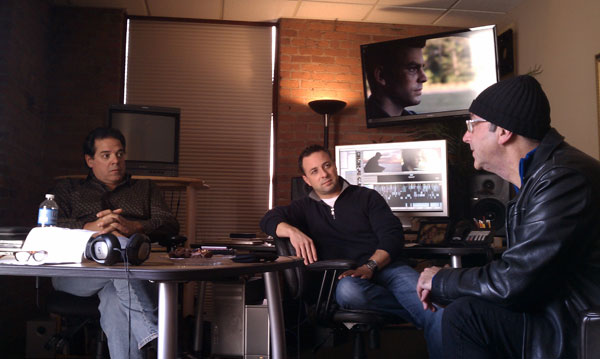 “I can’t stress enough the importance for me in having music to work with. I can’t move forward with a theme without it.” – Nick DiBella

JM: Nick, how do you communicate to these guys what you want the music to sound like?

Nick DiBella: It is interesting because I might say: Steve I need something darker or I need to set a tone, or I need it to build. The right audio for the right look adds up to the right moment.

Steve Bartolotta: I know that when people look at these types of case studies, they want to read them and analyze why it works. But, in this particular case, I think we just all think alike and we are similar in the way we approach a project, and that isn’t always the case, but I don’t think you can nail it down and say… this is how the magic happens.

Nick DiBella: You almost have to take what the movie gives you, whether its the story or the actors or the edit. You sort of pick where you want to start and you start it there. You might say. you know that doesn’t work the way I thought it would and then you start again with another… and all of a sudden, even the edit turns out a little different from what you thought it would.

Steve Bartolotta: I think that is how you build a unique film…you just have development that are endemic to that film only.

JM: Do you guys always agree on everything?

Steve Bartolotta: I don’t think we butt heads a lot. I have worked with Nick on other projects where you know, we haven’t always agreed.

Nick DiBella: Honestly I think Steve knew that I was insane going into this (laughingly), honestly he already knew that I can be very hard. I like things a certain way. Not that I am not open to things but I know when it’s working and when it is not. So far it has been working and I think it is because he has given me so many things that I can choose from. Now there will be a path in this where we will go back into that music and polish a little turns and I think we will be a lot more critical at that juncture.

Steve Bartolotta: I think it has been very smooth. It is usually a lot more work in any relationship, not just this one.

JM: What do you attribute that to?

Jim Pavone: I am spoiled right now because I am a lay person and I am not experienced in the film industry and I am looking at footage right now that has this soundtrack and we see it is evolving with Steve Bartolotta outside of the editing room and Nick DiBella had touched on that usually isn’t the case. I first pictured Steve Bartolotta at an editing screen with a keyboard and guitar, but it has been absolutely non-traditional.

Walking in here I didn’t know any different, so I am getting an appreciation for the art forms of editing and scoring a film. There is no question in my mind that this process is being spiritually led. Nothing is off the table; nothing is… not do-able. It is a blessing and a testimony that I will bring with me for days, months and years to come, that nothing is impossible when we have our heart in the right place and we use the gifts that God has given us.

King’s Faith Producer, Writer and Director Nick DiBella is an award winning writer and director whose self-taught knowledge in filmmaking began at the Eastman Kodak Company where he created films for Kodak’s Entertainment Division. His 1997 screenplays Runnin’ Home and Address Unknown were produced for cable TV and his 1998 spec script, Chasing Bobby Jones was sold to Warner Bros.

July 2001 marked a continuing relationship with Warner Bros. when they hired Mr. DiBella to write the remake of the 1950’s classic A Summer Place. His other produced screenplays include Kart Racer (2002), acquired by Knightscove Entertainment and Apollo Media — the $7 million dollar production starred Randy Quaid and was released by MGM.

In 2005 Mr. DiBella directed and co-wrote the stylish teen noir feature Cherry Crush starring Nikki Reed (Twilight) and Jonathan Tucker (The Ruins). Distributed by First Look Entertainment, the micro-budgeted film was ranked in the top 25 of most rented movies during the early weeks of its domestic release.

Scoring demos from King’s Faith can be found here.

King’s Faith will be available on DVD October 22nd. For more information on the film, visit kingsfaith.com